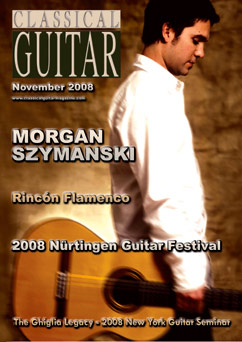 The November 2008 issue of Classical Guitar Magazine features Morgan Szymanski on its cover and includes a three page interview with photos. Interviewed by Oliver McGhee, the interview includes discussions on technique, life as a musician, influences and future plans.

Recordings included the release of ‘Songs in Time of War’ – the music of Alec Roth on the Signum Label (www.signumrecords.com)) with Mark Padmore, Phillipe Honore and Alison Nicholls. Morgan also recorded Heitor Villa-Lobos’s ‘Prelude No.1’ for Ginkgo Music (www.ginkgomusic.com), project Tropical Forest Ecuador. Profits from this CD will go towards the preservation of the Ecuatorian rain forest.

Premieres included the world premiere of Morgan Szymanski’s ‘Zambezi Sarabande’, for children’s choir, massed marimbas and guitars and string quartet – performed at the closure of the Bulawayo Music Festival in Zimbabwe. The collaboration between Morgan Szymanski and ODuo, which already includes a wealth of repertoire by Piazzolla, Machado, Brouwer, Ponce and Lauro led to the creation of a new piece for guitar and percussion: ‘Los Ambulantes’ by Stephen McNeff. ‘Los Ambulantes’ are the street vendors, jugglers, clowns, musicians, acrobats and dancers that live on the streets of Mexico City. The work was premiered at the Wigmore Hall, and was performed at the Mexico tour of Machaca, to critical acclaim. The arrangements of ‘Five English Folk Songs’ by Alec Roth for tenor and guitar were premiered at a concert for the Rochdale Music Society with Mark Padmore.

Mexican born Morgan Szymanski started playing the guitar at the age of six. Early studies led to a scholarship at the Royal College of Music, London from which he graduated with first class honours in 2004.
Since then his career has led him round the world playing as soloist with orchestras throughout Europe, USA, Latin America and Africa and as a chamber musicians with leading string quartets and soloists. including Mark Padmore, John Williams and Alison Balsom.

His programme tonight is entitled “A Musical Journey through Latin America” and includes music from Mexico to Brazil by composers from Ponce and Villa-Lobos to Brouwer and Bellinati.

¡Vámos! A Musical Journey through Latin America
Morgan Szymanski, guitar, presents a wonderful programme of exciting and soulful music from Latin America. Be transported to exotic and vibrant places as Morgan, our friend and resident musician, returns to some of his favourite music illustrating a journey through Latin America. Gorgeously sizzling melodies and complex rhythms from composers such as Oliva, Ponce, Villa-Lobos and Piazzolla make for a programme of soul and passion.